The remix for Jovan Karcic’s song “Echo Echo” is now out on Bandcamp. The original version of "Echo Echo" is from the album "2015" by Jovan Karcic (Gaunt, Haynes Boys, Scrawl, and more), released January 2019 on Scioto Records. I spent most of my heyday in Chicago where my attention was centered on the local music scene. What was hot in Columbus, Ohio was not in the center of my radar so I missed a lot from this artist. Getting the chance to lean into his music and voice has

Lesley here. It’s national poetry month and I’ve been writing a bit almost daily. No real platform to post poems on. No real point either. For one, these will probably become songs and change with the music. Still cookin. Here's a poem that is concrete as in recently recorded into a song. It has a bit of a classical feel like something from Literature or a lot of Mal VU tracks. This album we're working on has a lot of exploration--maybe you heard Happiness or Hurricane Irene 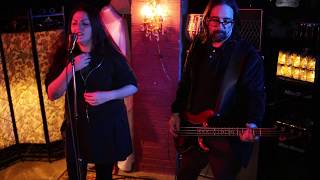 Yeah, well, we still haven’t figured out how to make a livestream video sound okay but we’re working on it. Meanwhile, we recorded this video last night using a drum loop from the demo session. This is legitimately us though and not robots. Sound is, eh, fine. It's fine. Stay safe and wash those paws! Octopus by After-Death Plan Another sad one brought by the sad tide that is my wasted sea Nature makes a bloom of just the right reach for the long-necked insect to feed An

Well, this was a wash (and other first world problems). I assumed this show would be cancelled but you never know and now we know. Checked a couple of sources since it is April Fools' Day. The Coronavirus put a stop to any and all shows till at least May. I just read on Columbus Underground that school was cancelled in May followed by the correction *UNTIL* May. Ow, my heart. Production trained me to be motivated by piling on and rising up from the chaos a phoenixlike im

I guess it’s going to be this way where we work on an After-Death Plan album then flood the inter-webs while promoting said album then disappear to work on new material. Like any artist, I have a strange relationship with social media. Being actively involved on these sites changes what I put out in my daily writing. When removed from hundreds of scrolling thoughts of others, my own thoughts change to sociopolitical overviews, literature, science, and the wood wide web: fl

It’s the 20th anniversary of this Mal VU recording of Black Swan. The text is from an opera by Carlo Menotti about a fictive medium who makes her living pretending to contact the dead. During a fake seance, she feels a spectral hand gripping her throat and freaks out. She blames the mute servant boy (don’t we all?) who wasn’t even in the room. Her daughter calms her down by singing this super creepy, Jungian, Wagnerian, dark mythic lullaby. I'd sung this aria while studying v

After-Death Plan is excited to announce it is a recipient of Artist In The Community resource grant by the Greater Columbus Arts Council. T

Thanks to the Upper Arlington Public Library for including After-Death Plan in their Listen Columbus program which hosts a digital collection music of local music and licenses that music to stream to the public. UA’s Listen Columbus program is made possible through a grant from the federal Institute of Museum and Library Services (IMLS), awarded by the State Library of Ohio, and additional support came from the Friends of the UA Library. If you follow After-Death Plan then yo

Enormous thanks to Matt Catchpole and Essentially Pop for taking the time to listen and to write this great review. We're big Peter Gabriel fans (and PJ and The Kills). It means a lot to reach listeners that would find common threads to these particular artists. Here's the review: BODY TALK – Ohio’s After Death Plan Release Follow Up To Debut Album ‘Literature’ Their first album was 20 years in the making, but US duo After Death Plan have wasted no time in coming up with a fo

Cathy Keustermans from Belgium sent us this picture she drew while listening to the After-Death Plan album Literature. This inspired some great conversation about what invokes the inner artist and commands you to create. We love this so much. #AfterDeathPlan #Literature #CathyKeustermans
1
2
34